I met a lovely lady
Anna is her name
She had some virtual goggles on
As we played an Autism sensory game.

She's a very caring lady
And bright as bright can be
So I'm looking forward to her photo exhibition
To see what she can see.

By viewing inanimate objects
Which look like other things
And seeing the positive aspects of Autism
And the possibilities they bring.

She's reaching out in a non-verbal way
To connect and make people smile
Because communications that make you feel good
Make life so much more enjoyable and worthwhile.

The event is kindly sponsored by The Henry Smith Charity (Horley), which aims to bring about lasting change to people’s lives, helping them to benefit from and contribute to society.  They achieve this by funding organisations that work with people to reduce social and economic disadvantage.
www.henrysmithcharity.org.uk

According to Wikipedia, Pareidolia is "a psychological phenomenon in which the mind responds to a stimulus, usually an image or a sound, by perceiving a familiar pattern where none exists (e.g. in random data).
Common examples are perceived images of animals, faces, or objects in cloud formations, the Man in the Moon, the Moon rabbit, hidden messages within recorded music played in reverse or at higher- or lower-than-normal speeds, and hearing indistinct voices in random noise such as that produced by air conditioners or fans."
++++ 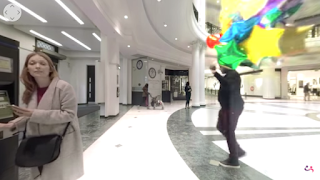 Anna and I first met at The Autism Show in London in 2017 - we happened to be standing side by side wearing goggles and headphones whilst watching The National Autistic Society's brilliant virtual reality video about the challenges faced by some people on the Autism Spectrum when they go shopping.
We instantly hit it off.

As someone who is on the Autism Spectrum, she totally understands the need for the type of planning, organising and decluttering help offered by Rainbow Red and specialist members of APDO (The Association of Professional Declutterers & Organisers), and similar organisations worldwide.
++++

Cherry Rudge of Rainbow Red is delighted to have been invited to contribute to Jo Cooke’s book “Understanding Hoarding” (published by Sheldon Press in 2017), to talk about her experiences as the daughter of a hoarder.

She was a founder Member of APDO’s Hoarding Advisory Team and a member of The Chief Fire Officers Association’s Mental Health (formerly Hoarding) Working Group, and helped organise the first ever UK Hoarding Awareness Week in 2014, attending the event launch at the Houses of Parliament in London.

In 2013 Cherry became APDO’s Chair and Acting President, later stepping down from all her APDO roles in 2014 to care for her father who had Alzheimer’s.

She became a Dementia Friend in 2015, and devised an ice-breaker form to empower people to discuss with a medical practitioner the affect that clutter, disorganisation and/or hoarding has had on their health, so that the most effective treatment and holistic recovery pathways can be signposted.

Cherry is an advisor to Surrey County Council, Surrey Fire & Rescue Service, and a volunteer at FastMinds ADHD/ASD support group in Kingston-upon-Thames; she helped co-ordinate their participation in the 2016 Gnome Project at Hampton Court Palace.

Cherry undertakes regular Continuous Professional Development (CPD) training to enhance the holistic services offered by Rainbow Red, and offers training and workshops to help people understand chronic disorganisation and hoarding behaviours, the types of medical and situational situations that can cause it, and techniques that can help people affected by these complex factors make decisions and take practical, sustainable control of their homes, and their lives.