Riding for your life 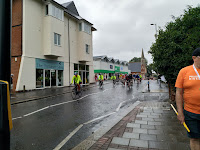 
The rain didn't put off supporters like me, braving the conditions to cheer, clap and cowbell the amateur cyclists on their way in the morning.  It was touching to see families holding up signs to the competitors saying things like “Hello Mummy!”
I found it deeply moving and very humbling meeting competitors who'd had to stop - they were wet, dirty and oily and had been forced to dismount to make repairs - all were absolutely driven to get going as soon as possible, and keep going to raise money for their chosen charity.

I was told that the rain had washed the dirt away from the road, but left tiny flints behind, which is what caused countless punctures.  One unlucky chap who was walking his bike had apparently repaired two punctures but sadly the third one had beaten him - presumably he’d run out of spares!

I was so impressed by kind members of the public who came to their rescue; many turned out to be keen cyclists themselves, so turned up with special pumps, inner tubes, tyre levers, etc.  Thank you

A special thank you should go to the steward outside St Mary’s church, who had just run out of a supply of inner tubes that he was giving away for free.  He also generously donated part of his own bike to a chap whose wheel was in danger of coming off – even though he was going to have to cycle home himself. 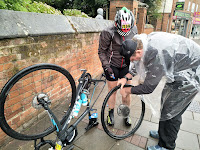 One cyclist who stopped even donated her own bicycle pump to help another lady (who'd come all the way from South Wales and was cycling for Bowel Cancer UK) whose pump had broken.

I later discovered that the lady from Wales managed to complete the race in a time of 7hrs 14minutes and 49 seconds.  Good on ya Jules!

As there's Bowel Cancer in my family, I shall definitely be donating to the charity - and will keep my fingers crossed that I'll never need to call upon their services....
Progressive Supranuclear Palsy Association (PSPA), which helps people affected by a neurological condition caused by the premature loss of nerve cells in certain parts of the brain  (it's a bit like Parkinson's Disease).

One thing really puzzled me - why was the cycle shop in Walton closed?  So many competitors would have greatly benefited from it being open so they could purchase bits and pieces to help them get to the finishing line.


To those affected by the route who complain about the inconvenience of being constrained by and contained within a the route of the race for a few hours one day a year, I would like to say three things:

Nigel Buchan-Swanson, from Chichester, had a cardiac arrest in Ockley Road about 56 miles into the ride; he was 69 and leaves behind a wife, three children and six grandchildren.

He had been raising money for Macmillan Cancer Support.
www.bbc.co.uk/news/uk-england-london-45003667

Posted by Cherry Rudge at 16:16 No comments: