So, in an interview with The Sun newspaper, British tv celebrity Ant McPartlin admitted he has been diagnosed with Attention Deficit Hyperactivity Disorder - ADHD – at the age of 43.

In 2018 the presenter and on-screen partner of Declan Donnelly (“I'm a Celebrity...Get Me Out of Here!” “Ant & Dec's Saturday Night Takeaway” and “Britain's Got Talent”) was arrested and convicted for drink driving, after which he took time off to go to rehab - which eventually lead him to receive his ADHD diagnosis.

To many people (mainly those who have ADHD or their families) this probably won't be a surprise.

As it says on the website of Fastminds - a wonderful ADHD and Autism Support Group in Kingston-upon-Thames in Surrey that we’re proud to be involved with – the implications of late ADHD diagnosis include:
Other UK celebrities with an ADHD diagnosis include comedian Rory Bremner; broadcaster Richard Bacon; performer, producer and award-winning founder of the band Black Eyed Peas will.i.am; and Olympic gymnast (and Strictly Come Dancing winner) Louis Smith, to name but a few.

Of the four, Louis Smith and will.i.am are the only ones to have been diagnosed as a child.

We hope that Ant will join a good support group like Fastminds, as he’d be amongst his “tribe”: creative adults who probably struggle with the same type of Executive functioning issues as he probably does:
It helps when people understand they're not going through the challenges alone - there are others in the group who may have lived through similar difficulties. They share their experiences (good and bad) of things such as mental illness; symptom history and diagnosis pathway, and strategies that help them cope with things like relationships, organising paperwork, financial problems, and decision making (such as decluttering).

Cherry Rudge - Founder of Rainbow Red and the Hoarding Ice-Breaker Form - has been studying ADHD and Autism and attending local ADHD support groups for several years; in 2017 she wrote about how the ADHD brain in the context of clutter, disorganisation, compulsive shopping/acquiring or hoarding in Jo Cooke's acclaimed book "Understanding Hoarding", and contributed a diagram (below) which illustrates some of the challenges faced by people with ADHD. 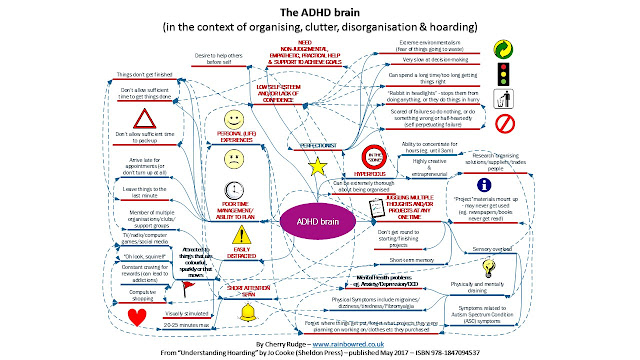 At an ADHD Support Group like Fastminds, Ant would be welcomed with open arms, and not judged. Because Fastminds is peer-led, and run by volunteers who live with ADHD and/or Autism every day, and people can be themselves, without having to put on a show and be what others feel they should be.

And, by the way, we should point out that Fastminds is an acronym for common symptoms that are often seen in ADHD: 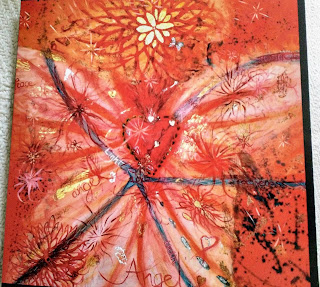 Without effective support groups and campaigners like the wonderfully creative folks at Fastminds (check out the amazing cards they designed and sell to raise money as part of their Neurodiversity Festival in 2018) there might be an awful lot more people in rehab, or in a drunken stupor or in jail, all because of a genetic neurological condition that has ruled their lives since birth.

Sadly, despite the increasing need for support groups like Fastminds (because Autism and ADHD are genetic, so it's not going away any time soon!) they receive very little support from Government, and getting an ADHD or Autism diagnosis can take months or even years. Imagine the cost of this to tax payers in antidepressants and counselling alone (let alone benefits payments!).

Some, like Ant, have money to pay for such treatment and therapy - others do not.

So, Ant, we wish you all the very best for the future, and hope that you use your gift of ADHD to support support groups like Fastminds, and help raise awareness of the types of challenges faced by people born with a condition that can be:

If you’d like to know more about ADHD, please take a look at Rainbow Red’s Pinterest board for LOADS of helpful videos and information.

Posted by Cherry Rudge at 01:28 No comments: