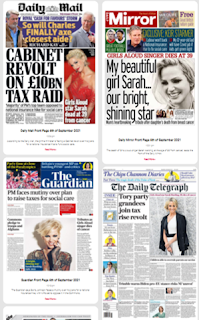 Yesterday's news about the death of the British singer/actress/celebrity Sarah Harding is all over the front pages of today's UK newspapers.

She had been a member of the hugely successful British/Irish girl band Girls Aloud (which sold over 4.3 million singles and 4 million albums sold in the UK alone between 2002 and 2012); went on to have a successful career as a solo artist, actor, model, tv presenter and winner of the tv show Big Brother in 2017.

Her autobiography "Hear Me Out" was published in March 2021, only a few months before her death, when she knew her cancer was terminal.

Before yesterday I admit to knowing nothing whatsoever about Sarah, except that she was famous.  So I was intrigued by the media coverage about her which revealed a fascinating, energetic character whose rollercoaster life and career screamed out at me that she was probably Neurodiverse.

So I did some online research, and sure enough, discovered that she was indeed diagnosed with ADHD as a child.  Which made total sense when I read interviews where she'd admitted things like:

Unfortunately, as with many other ADHD-ers, it’s likely that Sarah’s need for stimulation from others and impaired Executive Functioning meant that she neglected her own health and wellbeing (she probably self-medicated with alcohol as a coping strategy), and didn’t take action to address symptoms that could have indicated symptoms of a life-threatening condition until it was too late....

In my research I found various articles in which Sarah Harding admitted that she had dismissed a lump on her breast as a cyst during the pandemic in 2020, disguising her "denial" as COVID fear and concern for overrun hospitals.

In Sarah's autobiography "Hear Me Out", she wrote:

"At first I thought it was just a cyst. The trouble was the pain was getting worse.  It got so bad that I couldn’t sleep in a bed. Eventually my skin started to bruise. By now I was terrified.

“One day I woke up realising I’d been in denial. Yes there was a pandemic but it was almost as if I’d been using that as an excuse not to face up to the fact that something was very wrong.”

It was only when Sarah's skin began to bruise that she sought medical help.  Unfortunately, her lungs and kidneys were already failing and she was rushed to intensive care after a port fitted into her chest led to sepsis.  Doctors put her in a medically induced coma for two weeks, followed by chemotherapy and a mastectomy.

I urge organisations that treat and support those affected by cancer to take the opportunity of Sarah’s sad passing to target Neurodiverse communities and raise awareness of the importance of regularly checking your breasts and taking action as soon as possible if there are irregularities.

Meanwhile, one article about Sarah (which was published in The Guardian Newspaper only a few hours after the announcement of her death) really struck me more than all the others.

It was written by Michael Cragg, a music writer for the Guardian and Observer, and Editor of BEAT magazine, who included the phrase "....she suffered from undiagnosed ADHD as a child.....".

Which gave me a great idea that I’m going to suggest to Mr Cragg.

Sadly, as Sarah is no longer around for him to ask her what this statement means to her, perhaps he might like to consider interviewing other performers who have been diagnosed with ADHD, and write articles about their views on how they might be able to relate to his statement about how Sarah "suffered from undiagnosed ADHD as a child", and what eventually getting a diagnosis meant to them, and how they live with the condition now.

For example, for ADHD how about interviewing Dave Grohl (Nirvana, the Foo Fighters), Will.i.am, Mel B, Steven Tyler (Aerosmith front-man), Ozzy Ozbourne (who also has Dyslexia) or Justin Timberlake.

And then perhaps other famous music industry icons too, who have been diagnosed with other Neurodevelopmental conditions such as:

Maybe also ask them about their own experiences of being affected by cancer, addictions or mental ill-health while you’re at it Mr Cragg?

Before it’s too late, like it was for Sarah and countless other performers…

Posted by Cherry Rudge at 15:05 No comments: 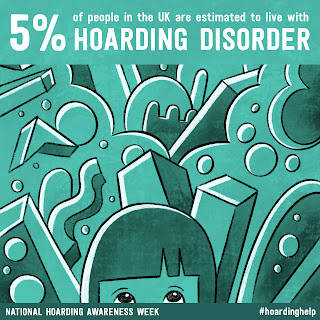 Ever since I became a Professional Organiser (back in 2010) and started learning about how to help people with hoarding behaviours, books written by hoarding/OCD experts (usually based in the USA, where most of the original research on hoarding behaviours was carried out) told us that the estimated percentage of the population with Hoarding Disorder was anywhere between about 2% and 6%.
How accurate those figures are now I don't know - I don't think anyone knows. The statistics may have changed since COVID-19 changed everything - hopefully one day new research will be carried out that tells us.
Meanwhile, even though I'm not known for being a number cruncher, I thought it would be interesting to work how those statistics might apply to the UK.
So, for the purposes of this exercise let's assume that the estimate of 5% shown in the thought-provoking image above (and the one below, both kindly created for Hoarding Awareness Week by Steff Lee, Creative Director of animation studio Kinobino) is about right for the total percentage of people likely to be living with:
and/or
That means that in the UK:
I could go on....
*Over 60's is the age group at greater risk of needing hospital treatment or having a fire in their homes than other age groups.
What don't we know?
What we don't have are the statistics about the impact on families, friends and support networks affected by clutter/disorganisation/hoarding-related issues. For example:
I could go on....
And let's not forget the professionals and trades people whose jobs involve working with people affected by clutter, disorganisation or hoarding behaviours on a DAILY basis, such as:
I could go on....
What I know from my own personal and professional experiences is that: 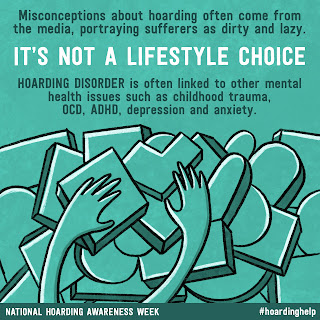 Both hoarding behaviours and Chronic Disorganisation can:
In both cases, that person can be extremely vulnerable to abuse, which is how people can end up in abusive relationships or becoming involved with the judicial system - as a perpetrator or a victim, or both.
What causes Chronic Disorganisation or hoarding behaviours?
Both are often mis-diagnosed and mis-treated by medical professionals, who prescribe anti-anxiety/ant-depressant medication without attempting to investigate or address the root causes of their patient's Executive Dysfunction - their ability to (for example):
I could go on....
In my experience of working with clients with complex needs, it's easier to assume (unless proven otherwise) that most of them have either Autism or ADHD or both, and/or other neurological conditions - usually undiagnosed.
In the case of engrained hoarding behaviours, there has often been some kind of trauma in the person's life, and they have one or more diagnosed mental illness.
What they rarely have is adequate or appropriate support from medical professionals able to identify that the root cause of their anxiety or distress could be a Neurodiverse condition such as ADHD, Autism, Dyslexia or Dyspraxia; mental health conditions;Acquired Brain Injuries (ABI), and sadly now also Long COVID.
Nor do they have enough assistance or support to manage day-to-day activities, which is how things become more and more chaotic, debts occur, bills don't get paid, etc.
Predicting the future
In a report published by the Office For National Statistics in 2019, they predict that the proportion of the UK population aged 85 years and over will almost double over the next 25 years, and that by 2043 the UK population will have jumped to 72.4 million.
So I did a very basic comparison of what could happen to the total UK population statistics previously mentioned, based on three possible scenarios:

Whilst some may argue that the results include people of all ages rather than adults only, it's important to understand that there is a genetic element to hoarding behaviours and chronic disorganisation which shouldn't be ignored.
Benefits of change
What is clear from the results is that investing in positive action to create policies with more holistic approaches to supporting this group could, for example:
Transformation plan
Reducing the risk of Chronic Disorganisation and hoarding behaviours occurring would require (for example):
Can you see the (£) signs?
Yes, there could be a lot of funding required to make this happen, and yes, it could take a while to achieve a worthwhile Return on Investment (ROI) for this major transformation programme.
If nothing else, I invite you to purely asses the benefits case associated with perpetually having to replace the exhausted and overwhelmed health and social care professionals struggling to cope with ridiculous caseloads, in the same way as the people I've been writing about are struggling - the ones they're supposed to be there to help.
Remember, hoarded and cluttered homes can kill people - whether by fire, mould or having a fall. So doing nothing to reduce the risk is not only playing with fire, it's like fanning the flames, falling over the fire extinguisher and knocking yourself out.
And that wouldn't be a very pleasant lifestyle choice, would it?
Yours practically...
Cherry
+ + + + +
Are you one of those people who's struggling? Or do you know someone in need help and support?
If so, you could:
If you don’t know what to say, you could try using the Hoarding Ice-Breaker Form (currently available in English, Dutch and Spanish) to start a conversation - simply print it out, tick a few boxes, estimate what level on the Clutter Image Rating Scale (CIR) the piles are in the various areas of your home, and hand it over to your trusted person.
And if the person you chose to talk to isn't very empathetic, you could suggest they:
#hoardinghelp #hoardingawarenessweek #hoarding #FireKills #mentalhealth #chronicdisorganisation #ExecutiveDysfunction #Neurodiversity #clutter #stopthestigma
+ + + + +
Cherry Rudge is a Professional Hoarding Practitioner, trainer, mentor, consultant, activist, campaigner and creator of the Hoarding Icebreaker Form.

Posted by Cherry Rudge at 00:27 No comments: