What's the matter with Tony Slattery? 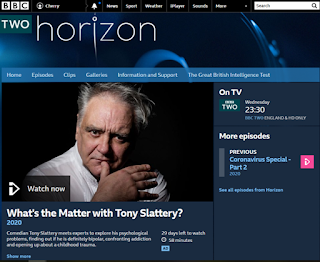 If you're old enough to remember and enjoy (as I did) the 1980 improvisational tv show "Whose Line Is It Anyway?", the name Tony Slattery has probably been imprinted on your brain forever.

I remember marvelling at the time at the lightening speed of the stand-up comedians who enthralled us with their creative genius.  Many - such as Sandi Toksvig and Paul Merton - have gone on to become household names in the UK.

What is less well known is that Tony's mental health declined over the years, and the reason for it.

So serious hats off to Tony and Mark Hutchinson - his partner of over 30 years - for allowing the BBC to follow them to film a Horizon documentary about what might be causing Tony's depression, alcohol dependency and addictions over the years.

There was lots of discussion about the possibility of him maybe having undiagnosed Bipolar Disorder, and having been repeatedly sexually abused as a child.

What's unfortunate is that the documentary didn't explain that it's known that childhood abuse (also known as Adverse Childhood Experiences - ACES) can have adverse effects on victims as they get older, including having an effect on their health and wellbeing.

ACES (and abuse as an adult) also happens to be quite common amongst people with hoarding issues.

What's peculiar is that there was no mention in the documentary of any possible underlying neurodiverse conditions (eg. ADHD or Autism/Aspergers) - especially when you consider that other creative celebrities have these diagnoses.

For example, British comedians Shappi Khorsandi and Rory Bremner (who famously made another documentary with the BBC about getting his ADHD diagnosis as an adult), or the American comedian Jim Carrey - who also has experienced prolonged periods of depression, which he describes as "the body's way of having deep rest - from the character you're trying to play".

Hopefully there will be a follow-up programme about Tony where they will dig deeper to find answers, but in the meantime we hope that by talking about the issues it has unlocked something that can begin to help him on the road to recovery.

Tony, Mark - thank you for bravely sharing your experiences with us during Mental Health Awareness Week, we wish you all the best for the future.

WARNING:  The documentary contains references to childhood abuse which viewers may find upsetting.

Posted by Cherry Rudge at 09:42 No comments: